Post Mandurah, training was pretty ordinary after coming down with the flu and every session was becoming a battle to get thorough, I was even re-thinking my start at Western Sydney but luckily I found my form again early pre-race week and the confidence boosted straight back to the top. The weather was hot in the lead up to the race which gave me every chance to train for the predicted temperatures at Penrith, this year top was just over 30C which was nothing compared to last years event.
Western Sydney 2015 featured a solid pro list including names like Tim Van Berkel and Mark Bowstead which I was lucky enough to share the Pro Panel with. I was a bit shocked to have been asked to come along to the Pro Panel but jumped at the opportunity and was very excited to take part. I had a lot of fun being in great company and having Pete Murray as the interviewer, hope to get the call up again in the future. 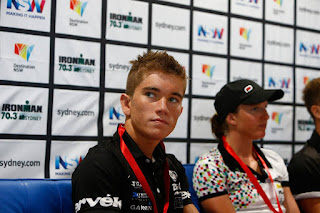 Photo Credit: Delly Carr
I was at Penrith all day Saturday for the usual pre-race training and briefing, had a chance to swim at the Atmosphere Health/Fitness Center pool which is an excellent facility, highly recommend you check it out if you're in town. The rain was on and off all day and it wasn't looking promising for the race either, racked my bike in transition and made sure to cover it up to protect it as much as possible from the weather to ensure a clean drivetrain. Unfortunatley I wasn't able to get accommodation in Penrith for Saturday night so had to make the drive home Saturday night to prepare for a 2:45am wake up Sunday morning.
The course as follows; Swim 1.9km, 1 loop in the freshwater Regatta (non-wetsuit), Bike 90km, fast 2 laps and Run 21.1km 2 1/2 laps, as flat as it gets. 18 Pro Males lined up on the start for a drizzly Sunday Morning race start at 6am

Definitely not the best deep water start I've had, bit slow off the mark and I wasn't able to create a gap early having Munro and Kastelein sitting on my hip for the first couple of hundred meters. I felt pretty average for the first part of the swim, however, the three of us manged to create a decent gap on the rest of the field by the first turn buoy. I came good heading back down the lake and swapped turns at the front with the two other guys, we continued to increase our lead and exited the water with a 1:10min gap on the main group. 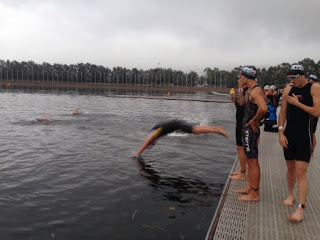 Out onto the bike I took in some nutrition straight away to prepare for a solid ride, as soon as we got out of the Regatta I attacked hoping to leave both of them behind, although Munro being behind me he was able to react and latch on but I left Kastelein unprepared for my break away. I quickly settled into my rhythm and went to work on creating the biggest gap possible on the chase group which was full of some very fast runners. Rounding the first few corners was a bit sketchy as I was getting sideways due to the slick roads and had to slow it down a notch to keep myself upright to avoid hitting the deck which the lead moto managed to do at one of the U-Turns. Crossing paths with the chase pack for the first time left me pretty frustrated seeing 9 guys spread within only 50m, I knew these guys were going to be hard to hold off having a couple of strong riders at the front but was determined to stick to my race plan. After having a strong first lap my lead was now over 3min 30sec, unfortunatley I still had Munro on my tail and headed onto next lap to try and capitalise on this gap. Second lap was very congested out on course but was still feeling strong and averaging the same as the first lap, roads had dried up a bit and was able to attack the corners with a little more speed. The chase 'pack' must have got their act together on the second lap which prevented me from putting anymore time into them, coming of the bike with a 3:30min gap. 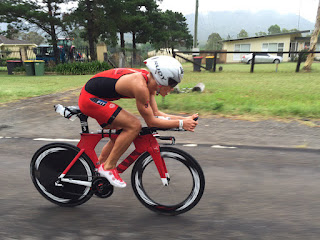 A lot going through my head in transition, I left my watch behind and headed out onto the run going on feel, chasing the finish line. Felt great coming off the bike, form was great and speed was there, by far the best my body has felt coming off the bike all season. I was able to start on nutrition early and was confident that this was my day. The worst thing about the course is that you can see everyone all the time on the run, I got around the other side of the lake for the first time and saw the chaser's moving along fast. I could here Pete Murray across the lake on the mic counting down the closing gap and it was lessening quickly, by half way he was only 1:30min down, this was going to be too close. It was at 17km he came past, quietly, not a word. I tried to stick with him for as long as I could as I wasn't giving it up without a fight, the gap just kept growing further and further and with a km to go there was no chance. Was always going to be hard to hold off a runner with fresh legs. Settled for another 2nd place to finish off 2015 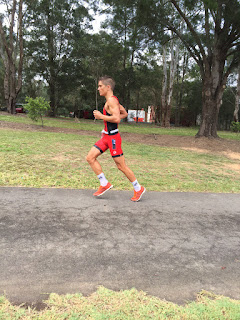 Very happy with my race, probably the best to date. I'd be lying if I didn't say I was disappointed with the outcome but pleased to say I am improving with each race. I came to this distance looking for a more individual style of racing and unfortunately this wasn't the case on the weekend after hearing much feedback from other athletes and spectators on course. This makes me more determined heading into the new year, with that said I will continue to race with all I've got until it's enough. Thanks to everyone out on course for the support, especially Josh Amberger and Ironman for the live updates and photos. Huge thanks to all my sponsors, providing me with the best equipment possible on race day and George from Endeavour Cycles for once again getting my Cervelo P5 race ready. 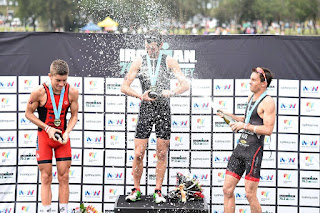 Photo Credit: Delly Carr
That wraps up 2015 for 70.3 racing, I look forward to some ocean swim events and cycle racing through the summer and seeing what 2016 brings 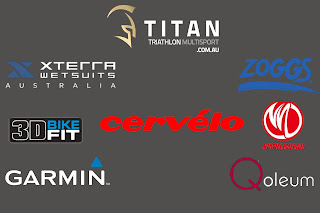 Posted by Jake Montgomery at 19:40 No comments: