I've been looking forward to this race since I first arrived in the US, Santa Cruz is an awesome spot and to have a 70.3 there my decision to race it was made easy. Although I was excited to get to this race it also meant my time in the US was coming to an end as it was my last race over here, couldn't ask for a better way to finish it off.
Post Boulder 70.3 I had some massive weeks of back to back training and was starting to feel fitness that I had only felt prior to my accident last year. These were great signs but at the same time had me nervous of over doing it, I was incredibly lucky to have Ben Cowin from Action Spine Denver still looking after me since the first week I arrived in Boulder. I'd see him once or twice every week and he would treat any soreness but also check the body for anything that may be developing and he did pick up on a lot of things along the way and got stuck into them early. It was great having my roommate Matt Franklin there to train and hang out with for the summer, there was never a dull moment and we pushed each other every session. I packed up house at Spruce Street on Thursday to fly out first thing Friday morning to San Francisco. Was fortunate enough to have Dad there waiting for me, he had made a slow trip West after Boulder 70.3 to do all things sightseeing and meet me there. We drove down to Santa Cruz that afternoon to check into the accommodation which was conveniently right opposite transition and race site.
Went through the usual pre race training and briefing on Saturday, I did some swim/bike course recon, luckily the algae in the water had cleared as I got an email Friday afternoon saying levels had been too high all week and they were thinking about other options, I was not keen on another cancelled swim.

I was super keen for the swim, beach start and in the ocean....
Morning of the race, racking the bike early the sky was clear but as I headed down to the swim the fog started to roll in and progressively got worse as the morning went on. At 6:30am they were still planning on a 6:50am start but a few minutes later it was postponed to 7am to see if it would settle, come 6:50am there was still no improvement and was dragged out until 7:20am. The delay was starting to irritate people, including myself and at 7:20am they made the call to move it to north side of wharf and shorten it to 750m for a 7:45am start. This was far from ideal but still glad they held the swim, visibility was still poor and I couldn't even see the 2nd buoy.
We were off finally, although we didn't have a lead paddler, the lifeguard lined each side like a channel so we had a general idea of where to swim. Once we reached the first buoy we could see the next but no further. It was tightly bunched from start to finish but managed to come out at the head of the pack and post the fastest time. The run to transition was about 600m and lost a few spots to some of the quicker runners but had a quick turnaround to exit onto the bike in 2nd. 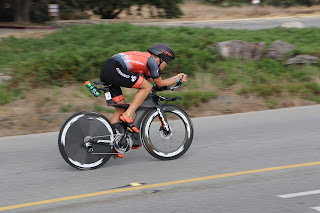 Photo cred: Dad
The first few km's of the bike was turn after turn, it was a struggle to pass and get into the lead but was ready once I hit the main road. More than half the pro field was out of T2 together so once I got out of the turns I hit the front and got to work, there was a hill just a couple of km's up the road that would break everyone up, it did. I had a small gap on Boecherer, Hoffman and Franklin, the chasers were out of sight. I continued to push hoping to make that gap bigger between myself and the 3 of them, I would get some good distance on the downhills but they would be within 30m going up hills. It remained like this for the first 25km's before Boecherer attacked up one of the climbs, he encouraged me to come along but I looked down at the watts I was already pushing and thought if I jump my race could be shut down early. I let him go hoping there would be a downhill to catch him on but unfortunately there wasn't. I chased until the turn around, still closely followed by Hoffman and Franklin but once I saw the gap I decided to notch it back a bit and ride with the 2 guys behind me. We had about a 90sec gap on the chase group at the turn around and hoped to increase that on the way home. Coming back wasn't so great, the headwind had picked up and the undulation made it difficult to find good rhythm. Came into T2 4mins behind Boecherer and turned around to see the chase pack of 4 right on our heels. 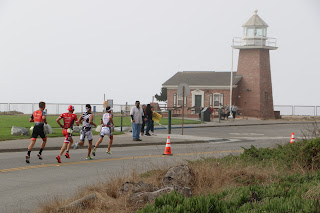 Photo Cred: Dad
I led out of transition but knew it wasn't going to last long with who was behind me. Hoffman was on my heels soon later and then O'Donnell and Currie came round to take the lead. I tried to sit on for as long as I could, I was feeling good but let them go after 2km. I settled into my pace and took each km as it come. Beals wasn't too far behind and kept me pushing, he caught me at 7km's and gapped me pretty quickly. Once we hit the trail loop out the back I found a good rhythm and was really enjoying this section and could see myself making up some ground. I caught Beals just before we got back onto the road and ran with him for a bit but once we got back on the pavement he took off. I was still running strong and knew once I got over that hill at km 16 it was all downhill. I was starting to hurt, suffering from some blisters and chasing that finish line as quick as I could. Around 19km I run past Boecherer on the side of the road with shoes in hand, unfortunately his day was done. I was super impressed with his ride and hope there's nothing too serious wrong. Coming down the finish straight, last 100m on sand was a nice tough and across the line in 5th. 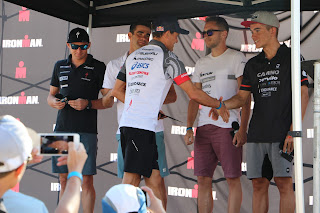 Photo Cred: Dad
A lot of positives to take away from the race, most of all my run, it was the 2nd fastest I've ever ran a half off the bike. Felt good in the water and am very pleased to finish off with 5th, the only thing I think about is what would have happened if I did attack with Boecherer...
That finishes off my racing in the US for 2017, I head back to Australia now for a couple of races before the years end.

Posted by Jake Montgomery at 14:06